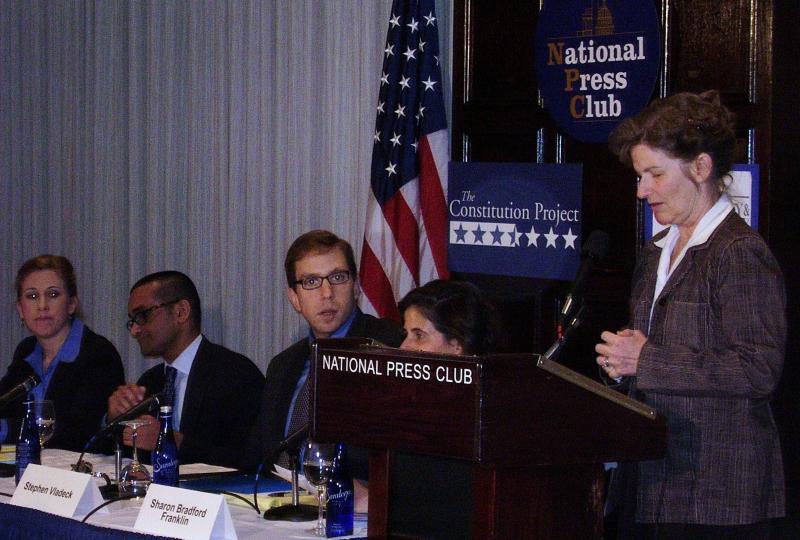 On Feb. 17, 2010 the Charity and Security Network teamed with the Constitution Project  to host a briefing on the Supreme Court case, Holder v. Humanitarian Law Project, which held oral arguments on Feb. 23.  The case is the first constitutional challenge to provisions of federal laws, including the Patriot Act, prohibiting “material support” for groups designated a “terrorist” by the United States government. The event, Free Speech, Human Rights & Counter-Terrorism Laws, explored the likely impact and misconceptions of the Court’s ruling on national security policies.

Speaking at the event, Stephen Vladeck, professor of law at American University’s Washington College of Law, began his remarks by provided a comprehensive history of the “material support” laws and their interpretation throughout different legal proceedings and legislation. He concluded his comments by clarifying that this case was “not about charitable donations,” but rather about “other types of material support that are non-monetary that include assistance, counseling and other [types of] conduct.”

Following Vladeck, Shayana Kadidal, co-counsel of the Humanitarian Law Project and a senior managing attorney at the Center for Constitutional Rights, explained how the Humanitarian Law Project’s works “specialize in nonviolent conflict resolution” and wanted to enter into discussion with a designated group about “peacefully resolving its disputes, carrying out human rights monitoring…and bringing various human rights complaints to international bodies.”  Kadidal also described a common but complex situation often encountered by nonprofits and aid agencies delivering humanitarian aid to people trapped in areas controlled by a designated group.  “The LTTE (Liberation Tigers of Tamil Eelam) were basically the functioning government in the eastern parts of Sri Lanka…these were areas heavily affected by the civil war but also devastated by the Boxing Day tsunami in 2004. As the functioning government it was very difficult to do material humanitarian aid without dealing with the LTTE in one way or another.” (see Legal Roadblocks for U.S. Famine Relief to Somalia Creating Humanitarian Crisis for more examples of how the laws complicate humanitarian aid delivery)

The final speaker, Lisa Schirch, professor of peacebuilding at Eastern Mennonite University and director of the 3D Security Initiative, characterized the material support statute as “a deterrent” on humanitarian operations around the world. As an example, Schirch described how her participation in a peacebuilding project in Afghanistan, called the Afghanistan Pathways to Peace, is complicated by the material support laws. “It’s never clear to me when I’m sitting with a large group of people in a room in Kabul , who in the room may be Taliban and who may not. So if we are researching the issues of what are the core grievances that need to be on the national peace process agenda…and we are listening to many different people, does my listening to people who may belong to the Taliban count as material support?”