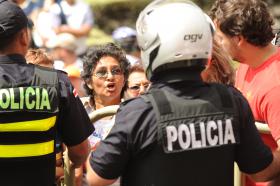 Financial Action Task Force (FATF) Recommendation 8 and FATF recommendations following evaluations add to the restrictions faced by civil society organizations, according to a new report from Bread for the World, The Impact of International Counterterrorism on Civil Society Organisations: Understanding the Role of the Financial Action Task Force. Asserting that the links between measures that fight the financing of terrorism and civic space are not known widely, the report explains the role of FATF in setting international standards that affect the way in which civil society organisations are regulated by nation-states, their access to financial services, and their obligations to avoid proscribed organisations and other groups deemed to pose a terrorism risk. The report summarizes the Global Coalition’s achievements to date in its Annex. Read more about this report.

A report from UN Special Rapporteur Maina Kiai, Imagining a World without Participation: Mapping the Achievements of Civil Society, notes that the Global Coalition has “progressively made gains in voicing concerns around the adverse effects on non-profit organisations of international policies against counter-terrorism and money laundering.”