Settlement in Libel Suit is Setback for Disinformation Campaign

Settlement in Libel Suit is Setback for Disinformation Campaign

Defense for Children International Palestine (DCI-P), a Palestinian human rights organization focused on child rights, secured a significant legal victory against smear attacks it has faced. As part of a settlement of DCI-P’s libel case against UK Lawyers for Israel (UKLFI), on March 9, 2020 UKLFI posted a statement saying, “In 2018 we wrote about Defense for Children International – Palestine and referred to links between some past board members and a designated terrorist organisation, the PFLP. We would like to clarify that we did not intend to suggest that the organisation has close current links, or provides any financial or material support to any terrorist organisation.”

UKLFI has conducted an ongoing disinformation campaign against DCI-P since 2018, by sending letters to DCI-P’s financial service providers alleging “links” to listed terrorist organizations. DCI-P issued a statement on March 10 that said the accusations were “unsubstantiated and distort critical factual or legal elements…”

This case is an example of politically motivated pressure campaigns to get banks and online payment providers to drop the accounts of organizations that they disagree with. Known as “deplatforming,” this tactic has been increasingly used by groups like UKLFI in a concerted attempt to undermine human rights and humanitarian work in Palestine,

In May 2018, UKLFI wrote to Citibank and Arab Bank PLC accusing DCI-P of terrorist links and asked them to stop processing DCI-P’s foreign currency donations. One month later, it announced that the banks had withdrawn services from DCI-P.

In June 2019, Global Giving, a crowdfunding community that connects nonprofits, donors, and companies around the world, discontinued its services to DCI-P after receiving a letter from UKLFI alleging DCI-P had “links” to a listed terrorist organization and that “donations to DCI-P have encouraged and/or facilitated acts of terrorism.” Global Giving said it had started an investigation, but cited no timeline and never restored services to DCI-P. In announcing each case, UKLFI posted its allegations on its website. The postings include UKLFI’s accusations, which use phrases such as “reported to be,” “is described as” and has “alleged affiliation.”

In June 2019, DCI-P initiated libel proceedings against UKLFI in the UK Royal Courts of Justice, represented by Bindmans LLP. In March 2020, the case was settled and UKLFI publicly recanted their allegations: 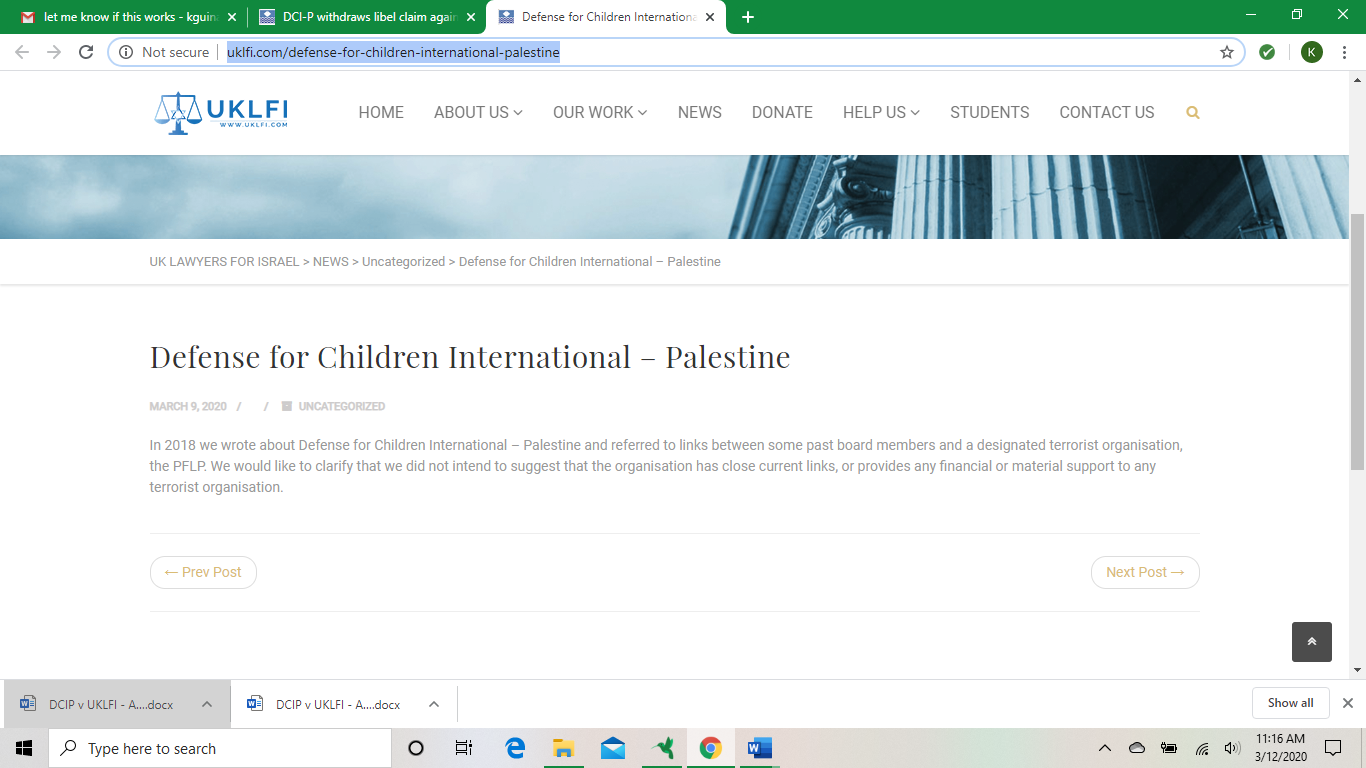 DCI-P also issued a statement regarding the settlement, noting that,

“UKLFI actions take place in a context where Israeli, Palestinian and international human rights and humanitarian organizations face increasing operational obstacles and shrinking civic space in Israel and the Occupied Palestinian Territory” and this has “negatively impacted the ability of organizations to deliver critical assistance to Palestinians and advocate on behalf of their human rights.”

On March 11, UKLFI attempted to walk back its original recantation, attempting to frame the settlement as DCI-P abandoning the case. UKLFI’s allegations against DCI-P remain on its website. UKLFI’s explanation is that “UKLFI did not write about any of DCI-P’s current board members in its published articles and therefore did not suggest links between present board members and a terrorist organization. Our allegations concerned previous board members up to May 2018…” (emphasis added)

The weakness of this rationalization is revealed by reading UKLFI’s 2018 and 2019 postings about DCI-P, which use the present tense and explicitly refer to current DCI-P officials. For example, the posting about Global Giving’s deplatforming action says, “Many current and former officials, employees and board members of DCI-P maintain strong links to the Popular Front for the Liberations of Palestine.” (emphasis added) The posting about Citibank and the Arab Bank deplatforming action says, “DCI-P has close links” to the PFLP. (emphasis added)

UKLFI’s attempt to qualify and recast its recantation as something else is as example of how it twists facts to distort the truth. UKLFI’s actions have caused significant damage to DCI-P, impacting DCI-P’s ability to raise funds and causing reputational harm.

DCI-P’s statement said that UKLFI’s action reflects a broader effort by “A network of Israeli civil society organizations, with support of the Israeli Ministry for Strategic Affairs and Public Diplomacy” which “have led targeted and organized defamation campaigns to delegitimize humanitarian and human rights organizations operating in the West Bank, including East Jerusalem and the Gaza Strip.” The Israeli government’s agenda in limiting the voice of groups like DCI-P was exemplified by its successful push to prevent DCI-P’s Brad Parker from addressing the UN Security Council in February. Parker describes the incident in +972 Magazine.