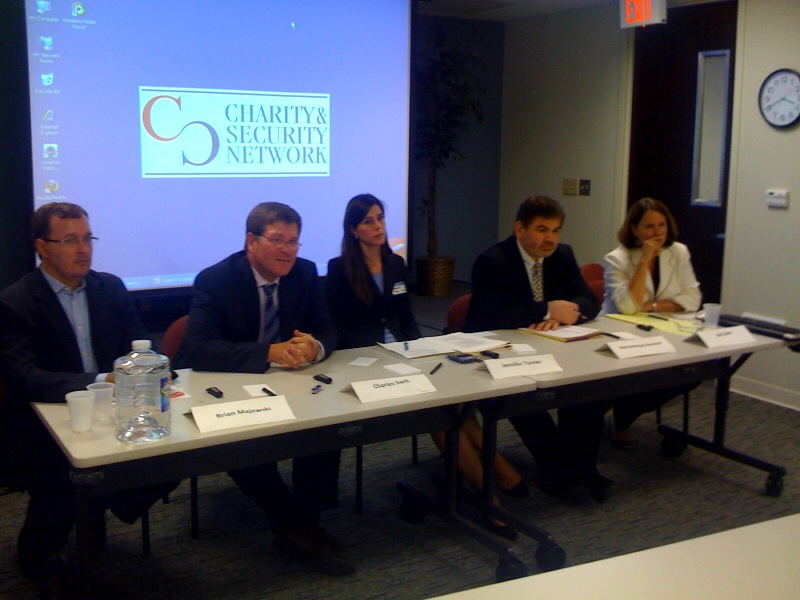 On July 1, 2009, a panel discussion featuring U.S. NGO leaders and experts shared their expertise on humanitarian codes, charitable groups and donors affected by U.S. laws and regulations.  The speakers voiced concerns over the legal constraints national security laws impose on U.S. charitable organizations that cause tensions with international law and codes for humanitarian aid and development programs and leave donors unsure where to safely and legally contribute.

The panel was moderated by Kay Guinane, the host and Program Manager of the Charity and Security Network. Her brief opening remarks touched upon the tensions between U.S. counterterrorism laws and widely accepted international standards for aid and development.

Brian Majewski, partner at the Global Emergency Group spoke about the international code of conduct and humanitarian principles and how they differ with U.S laws and policies. Starting with a short explanation of their origins, Majewski outlined the core humanitarian principles of the Code of Conduct for the International Red Cross and Red Crescent Movement and NGOs in Disaster Relief: the humanity imperative, impartiality and neutrality. He also updated the audience on the Sphere Project, a handbook, a broad collaboration on improving aid assistance and accountability. Majewski’s PowerPoint presentation is available here.

Charlie Swift is a partner at Swift & McDonald P.S. He explained the cause for and the specific applications of the Geneva Conventions in conflict zones. Summarizing the different types of conflict, Swift summarized what humanitarian assistance is permitted under each classification and where the protocols of the Conventions are either ignored or blurred by military actors. Having been the defense counsel in the Supreme Court case, Hamdan v. Rumsfeld, he shared his intimate knowledge of how the landmark case changed U.S. policies. Swift’s PowerPoint presentation is available here.

Jennifer Turner, a human rights researcher at the ACLU, shared her concerns about several U.S. anti-financing counterterrorism laws and the findings from Blocking Faith, Freezing Charity: Chilling Muslim Charitable Giving in the “War on Terrorism Financing”.  The report provides a comprehensive overview of how counterterrorism laws and policies have infringed on the civil liberties and rights of American Muslim charitable groups and individuals. The laws have been responsible for closing down charities with little or no chance of challenging the claims of terrorism and have had a “chilling effect” on donors who worry about financially supporting groups who might be targeted by the government for supporting terrorism.

Providing a human face to the charitable groups and people negatively impacted by harmful U.S. counterterrorism laws was the Chief Operating Officer of Life for Relief & Development, Mohammed Alomari. He outlined a series of events that eventually resulted in the charity being shut down by the government, having their assets and donations seized, and its donors hassled and frightened by repeated government inquiries and contacts.  The charity is still operating and Alomari is hopeful that “a different spirit” from the current administration will protect the rights of American Muslims.

Jan Lane, a Policy Advisor and Senior Fellow at the Homeland Security Policy Institute, had previously served as Vice President of Public Policy and Strategic Partnerships for the American Red Cross.   She talked about how she met with Middle Eastern students who felt intimidated by the U.S. counterterrorism laws and how opportunities to improve our national security are squandered by policies that isolate and antagonize potential partner groups and community leaders.

The event was sponsored by the Charity and Security Network.