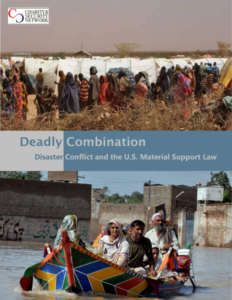 The politicization of disaster response in conflict zones obstructs timely and effective aid delivery and also jeopardizes the safety of aid workers. A new report from the Charity & Security Network, Deadly Combination: Disaster, Conflict and the U.S. Material Support Law, considers two cases: The 2011 famine in Somalia and the summer 2010 floods in Pakistan. In both cases, by giving priority to military objective, the U.S. impaired effective aid delivery by humanitarian organizations, exacerbating the hardship caused by disasters.

The current U.S. government response to disasters occurring alongside terrorist organizations is, at best, a ‘wink and nod’ gesture that allows for limited access for humanitarian groups (and no legal protections) and, at worst, a blanket ban on any humanitarian operation.