In May 1990, The Yemen Arab Republic (North Yemen) merged with the People’s Democratic Republic of Yemen (South Yemen) to form today’s contemporary state of Yemen. During the Yemen Uprising of 2011-12, thousands of pro-democracy protesters flocked to the streets to demand the resignation of the president. In September 2014, Ansar Allah, commonly referred to as the Houthis, seized control of Yemen’s capital.

In March 2015, a coalition of Gulf countries led by Saudi Arabia intervened on behalf of the Yemeni government, imposing a blockade and initiating a bombing campaign, for which the U.S. offered logistical and intelligence support. Both sides of the conflict have launched indiscriminate attacks on civilians, though the United Nations has pointed out that the Saudi-led bombing campaign is responsible for a majority of the civilian deaths in the conflict.

As a direct result of the war, Yemen is widely regarded as home to the worst humanitarian disaster in the world. The Saudi-led coalition’s targeting of food and water infrastructure, paired with the blockade, have contributed to multiple cholera outbreaks, and have helped drive millions of Yemenis to the brink of famine.

Before leaving office, the Trump administration designated the Houthis as a Foreign Terrorist Organization (FTO) and Specially Designated Global Terrorist (SDGT), prompting serious concerns over humanitarian access and warnings of widespread famine. Citing those humanitarian concerns, the Biden administration reversed the designations. President Biden has also said that he is ending all U.S. support for offensive military operations in Yemen, though it is not clear exactly what forms of support are ongoing. 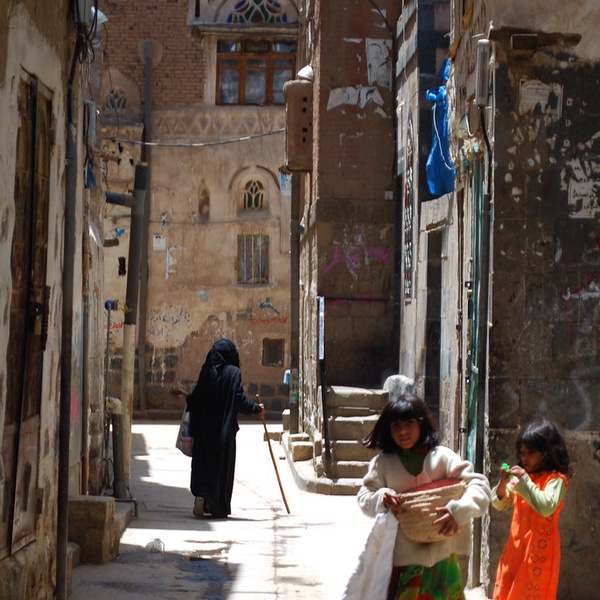 Below in the blue is an overview of the humanitarian and peacebuilding needs in Yemen. In the red are the primary sanctioned groups presently operating there. Because U.S. law prohibits the provision of “material support” to listed terrorists individuals and groups as well as engaging in trade with sanctioned persons and entities, the presence of these groups and sanctions programs can impact the delivery of aid and peacebuilding programs. The list below is non-exhaustive and changes frequently, so it is important for nonprofits to check all partners and those with whom they engage in transactions against, at a minimum, the U.S. Specially Designated National (SDN) and the United Nations Security Council Consolidated lists. Below the charts is information on OFAC licenses, where applicable, and links to our research and advocacy, and other relevant information.

According to the UN Office for the Coordination of Humanitarian Affairs (OCHA), over 20.7 million people in Yemen are in need of humanitarian assistance, with over 12.1 million facing acute need, as of January 2022.

Food Security and Nutrition: Over 16 million people are facing acute hunger, and 2.3 million children under the age of 5 are at risk of malnutrition.

Obstruction of Aid: According to HRW, both sides of the conflict have denied civilians the aid they need. The Saudi-led blockade continues to impede humanitarian access and prevent fuel from getting into the country, while the Houthis have blocked 262 containers in Hodeida port belonging to the World Health Organization.

Disease and Healthcare: While cases of cholera have significantly declined from peaks in 2017 and 2019, cholera still affected thousands in Yemen in 2021. Yemen has also faced outbreaks of diphtheria and COVID-19. According to the International Committee of the Red Cross, some 20.1 million people lack access to basic healthcare, and only 51% of health facilities are functioning.

Ongoing Hostilities: Since March 2015, the Saudi-led coalition has conducted numerous indiscriminate and disproportionate airstrikes killing thousands of civilians and hitting civilian structures in violation of the laws of war.

Displacement: According to UNHCR, there are over 4.2 million internally displaced persons (IDPs) and over 82,000 refugees in Yemen.

Al-Qaida in the Arabian Peninsula (AQAP): Formed in June 2009, this group is most active in southern, eastern, and central Yemen. It is designated as a terrorist group by both the U.S. and U.N. More information here.

Islamic State of Iraq and ash-Sham-Yemen (ISIS-Yemen): Formed in 2014, this branch of ISIL is primarily operational in southern and central Yemen. It is designated as a terrorist group by the U.S. and the UN under the UN ISIL (Da’esh) & Al-Qaida Sanctions List. More information here.

Islamic Revolutionary Guard Corps — Qods Force (IRGC-QF): Formed in the 1980s, this group assists government forces in suppressing opposition forces and ISIS forces. It is designated as an FTO by the U.S. More information here.

Ansar Allah — The Houthis: On its last day in office, the Trump administration designated the Houthis as an FTO and SDGT. The Biden administration ultimately lifted the designations as they would have prevented humanitarian and peacebuilding organizations from operating in much of Yemen, where the Houthis control territory that is home to 80 percent of the population.