The Alarming Rise of Lawfare to Suppress Civil Society: The Case of Palestine and Israel

The Alarming Rise of Lawfare to Suppress Civil Society: The Case of Palestine and Israel 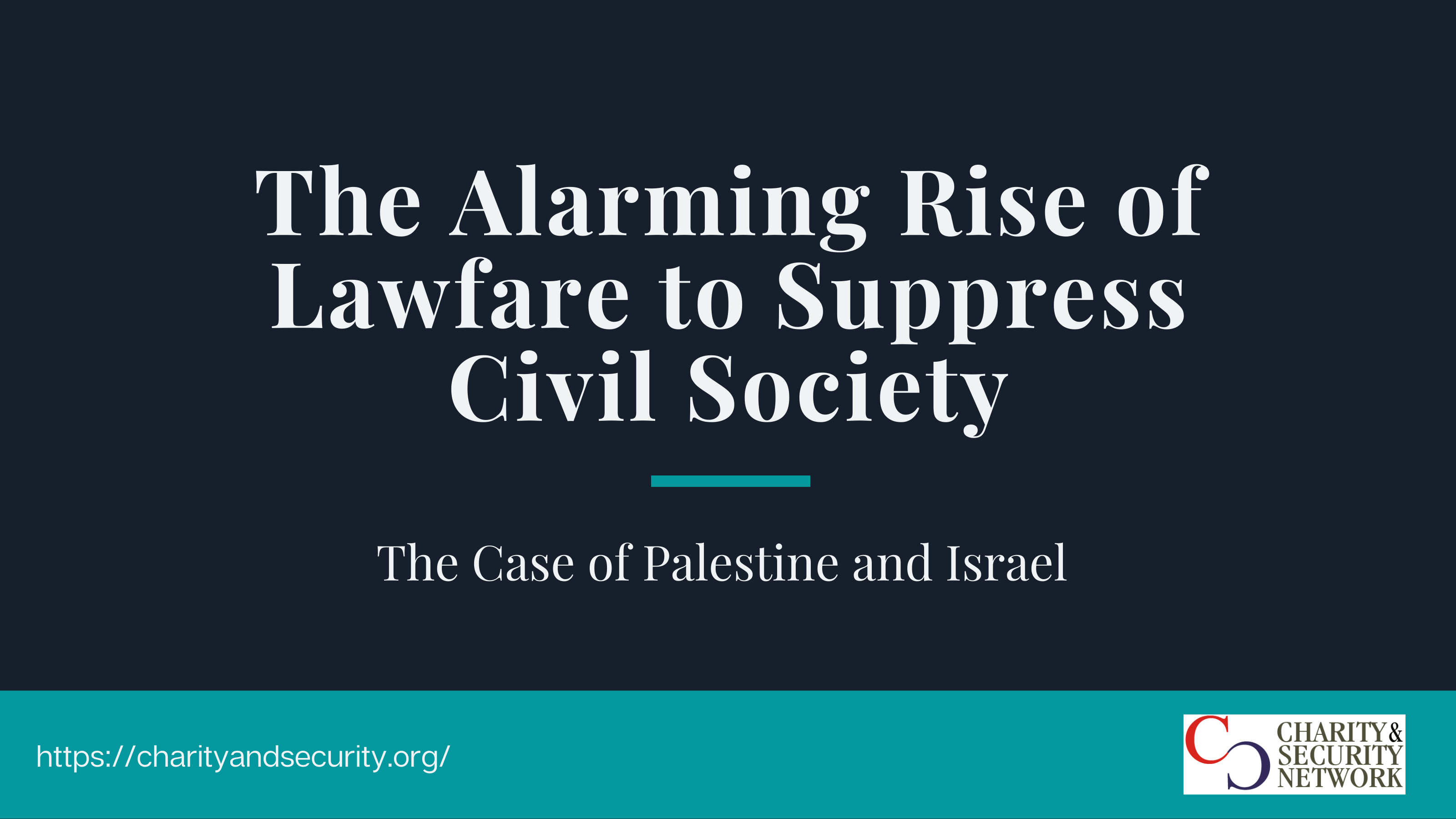 On September 28, 2021, the Charity & Security Network published a new report, The Alarming Rise of Lawfare to Suppress Civil Society: The Case of Palestine and Israel. The report details coordinated efforts by politically motivated actors to silence and shut down the work of civil society organizations that support Palestinian rights and operate humanitarian, peacebuilding and other programs in Palestine.

This report focuses on the use of legal forums for political purposes – a practice known as “lawfare” – that is more concerned with inflicting damage on an opponent than prevailing with a particular legal argument or proving facts based on evidence. Specifically, it focuses on lawfare attacks that seek to silence and shut down the work of civil society organizations that support Palestinian rights and operate humanitarian, peacebuilding and other programs.

Lawfare campaigns have evolved in the context of a larger global problem of shrinking civil society space – driven by authoritarian leaders seeking to restrict civic space in order to repress political dissent, and by counterterrorism measures passed in the wake of the 9/11 attacks that have impeded the work of civil society organizations around the world.

Civil society was a particular target of post-9/11 legal restrictions, driven by faulty assumptions pushed by the George W. Bush administration that nonprofit organizations (NPOs) were a significant source of terrorist financing, and were, in the words of the since- revised Financial Action Task Force (FATF) recommendation, “particularly vulnerable” to terrorist abuse. As a result, overly restrictive regulation has spread globally.

Lawfare groups have capitalized on this shrinking civic space to go after organizations that have supported Palestinian rights, using the tactics described in this report. They attempt to force the hand of governments by using whistleblower laws and lobbying for investigations that, if successful, could institutionalize their extreme and harsh interpretations of the law.

Lawfare can take many forms, including litigation, regulatory complaints and pressure campaigns aimed at cutting off funding. Their claims are generally based on disinformation or misrepresentation of the facts. While they rarely prevail on the merits or succeed in forcing settlements on NPOs, the costs and chilling impacts of lawfare attacks further exacerbate the shrinking civic space problem.

In the context of the ongoing Israel/Palestine conflict, over the last six years lawfare has emerged as a tactic against human rights, humanitarian, and peacebuilding organizations (and those that support them), as self-described “pro-Israel” groups reacted to human rights litigation against Israeli officials by going on the legal offensive against human rights defenders.

These attacks also take advantage of vague legal standards, including the U.S. definition of prohibited material support of terrorism. Countering lawfare thus requires a recalibration of the legal frameworks that enable it, as well as closer scrutiny of and accountability for the actors supporting it.

Litigation is a major tactic lawfare groups use to bring attention to their political issues, harass those they disagree with and impose costs on operations they do not like. The majority of these cases have been dismissed or settled without the targeted NPOs paying damages.

These suits have several factors in common. The allegations generally do not claim that money or tangible goods have been provided to a group on a terrorist list. Instead, they focus on speech and association, including democracy building, conflict resolution and human rights advocacy programs. Programs to assist Palestinian farmers and protect land rights are also targeted. Many of the allegations are conclusory, lacking supporting factual detail. The complaints often include politicized descriptions of the target groups’ activities and human rights positions, making broad and unsupported accusations that are not relevant to the case or the legal standards required to establish liability.

These cases are attempts to twist U.S. law away from its intended purposes in order to disrupt operations and impose costs on the nonprofit organizations targeted. Although these suits have not succeeded in winning trials, they do not need to do so to achieve their goals. Nonprofits that are sued must divert substantial resources to legal defense, including attorneys’ fees, even when cases are dismissed early in the process. This in turn has a chilling effect on all organizations that work in Palestine, or that wish to do so. Thankfully, this chilling impact has been partially offset by the fact that these lawfare attacks rarely succeed in court—but the potential for lawfare attacks to deal devastating blows to civic space will persist until flaws in the legal frameworks they rely on are addressed.

Lawfare groups have also challenged the charitable status of several U.S. and UK organizations active in supporting Palestinian rights or providing aid in Palestine. These attacks are existential threats to the targeted organizations, as recognized charitable status is essential for fundraising. To date none of these efforts have succeeded, but they have given lawfare groups an opportunity to impose costs as opportunities to issue public statements that repeat politically charged claims about link to terrorism. In addition, these complaints are also used to pressure the charities’ online donation payment processors, resulting in interrupted online fundraising capacity in two of the cases reviewed.

Despite lawfare groups’ claims that they only seek accountability and transparency, their tactics point to a concerted effort to deprive NPOs working in Palestine of the resources necessary to do their work. In this they have the support of Israel’s Ministry of Strategic Affairs and Public Diplomacy (recently folded into Israel’s Ministry of Foreign Affairs), which has joined them in pressuring other governments to cut foreign assistance funds for groups working in Palestine. Lawfare groups also use pressure campaigns to “deplatform” target groups, pushing online donation payment processors to close accounts.

Lobbying efforts by lawfare groups, disinformation groups, and the Israeli government have sought to pressure governments into cutting off foreign assistance funds to groups that work in Palestine or support Palestinian rights.

Summary of Observations and Conclusions

The report concludes with key observations that emerge from the research and concrete recommendations for the relevant stakeholders.

The emergence of lawfare against NPOs is not surprising, given the toxic combination of rising authoritarianism, overly broad post-9/11 emergency measures, and increasing encroachment on the space within which civil society can operate. In fact, these trends enable lawfare attackers, allowing them to take advantage of policy gaps and avoid difficult policy debates. However, lawsuits are not the appropriate place to settle foreign policy debates.

While lawfare campaigns against civil society are primarily focused on groups operating in Palestine or supporting the human rights of Palestinians, use of this tactic is slowly spreading, and can spread further, if there is not a robust response by civil society globally.

Lawfare groups incur little risk in their push to impose their political agenda. Their legal complaints are inexpensive to file and there is a glaring lack of accountability for lawfare and disinformation attacks.

Despite the concerted efforts and significant resources invested in lawfare, civil society’s response shows that pushing back works. NPOs that stand up to these legal bullies are more successful in defending themselves than those that do not. (But even successful legal defenses entail a substantial drain on organizational resources.)

Lawfare groups’ actions reveal their political goals and motivations. The primary drivers that emerge from the information in this report include:

➢ fear of a united Palestinian political front,
➢ the desire to expand areas targeted for Israeli settlements, and ➢ a notable degree of racial and ethnic animus toward Palestinians.

Finally, the degree of open collaboration and coordination between the Israeli government and the disinformation and lawfare groups it supports is striking. The Israeli government has played a central role in orchestrating the lawfare strategy, in addition to providing groups with resources.

The report recommends that everyone, including publishers and government officials, should be wary of allegations made by lawfare and disinformation groups. Where lawfare attacks occur, the disinformation used should be exposed as the politically motivated smear tactic that it is. Lawfare groups should be held accountable and given no presumption of truthfulness or credibility.

Where lawfare attacks occur, governments should address the factors that enable them. This means closing the legal gaps that lawfare groups take advantage of by making post-9/11 restrictions more targeted in order to safeguard civil society, and by providing clarity in the law that avoids overly restrictive interpretations.

➢  The Congress should update the material support statute to provide essential safeguards for humanitarian and peacebuilding programs and human rights defenders.
➢  The Department of Justice should provide greater clarity on what will or will not be prosecuted under the material support prohibition.
➢  The Secretary of State should exercise its authority under 18 USC 2339B(j) to allow civil society organizations to provide training, expert advice and assistance, and services to listed groups as part of their engagement in peace processes.
➢ Courts should recognize and act to deter frivolous lawsuits. They should not facilitate them by allowing plaintiffs to amend deficient complaints or otherwise try to bolster meritless claims.

Civil society stakeholders, from funders to operational groups on the ground, should recognize the political nature of lawfare attacks and push back accordingly. The philanthropic sector can increase its support for civil society organizations that work in Palestine and human rights defenders that advocate for Palestinian rights. Civil society organizations should not be intimidated or deterred from speaking up or from doing their essential work.

All donors, particularly government foreign assistance programs, must have more confidence in their own due diligence and screening protocols, which are very robust. When donor investigations are launched, they should be limited to the allegations in the complaint, and not become fishing expeditions that ultimately serve the political agenda of lawfare actors.

Material submitted for publication in magazines, blogs, news outlets and professional journals should be screened to ensure they are not providing a platform for further dissemination of disinformation submitted by bogus authors. If the factual allegations are not backed up or rely on the disinformation groups described in this report, the articles or posting should be rejected.