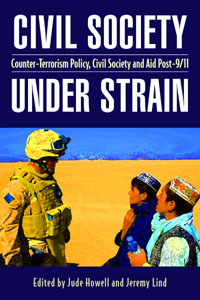 A January 2010 book is the first comprehensive examination of the restrictive and punitive impact from counterterrorism legislation on nonprofits since 9/11. Civil Society Under Strain; Counter-Terrorism Policy, Civil Society and Aid Post 9/11 (Kumarian Press) describes the threats organizations conducting humanitarian operations around the world are subjected to by unjust or overbroad anti-terror laws.

Each chapter is authored by nonprofit experts or scholars, presenting the common, shared and unique challenges for nonprofits in countries such as the United States, Sri Lanka, Australia and former Soviet republics like Uzbekistan and Kyrgyzstan. The chapter describing counterproductive counterterrorism laws that restrict U.S. nonprofits is written by Kay Guinane and Suraj K. Sazawal of the Charity and Security Network. The book was edited by Jude Howell and Jeremy Lind, both distinguished researchers at the London School of Economics.

The chapter about the U.S., Counter-Terrorism Measures and the NGO Section in the United States: A Hostile Environment, identifies the short-term responses to national security threats passed in the wake of 9/11, and their detrimental long-term consequences for the entire U.S. nonprofit sector. The chapter is divided into four parts:
The chapter concludes by strongly repudiating the myth that charities are a significant source of terrorist financing. It also calls for nonprofits to collaborate on creating alternatives procedures and standards to the current anti-terror regime that is unclear and lacking basic process.
Charity-and-Security2019-10-17T13:23:00-04:00January 15th, 2010|