On Tuesday, June 21, 2011 the Charity and Security Network sponsored a forum at the National Press Club featuring Ambassador Nancy E. Soderberg and a distinguished panel of U.S. nonprofit experts calling on the Obama Administration and Congress to remedy the negative effects of counterproductive security measures on peacebuilding activities and charities and donors.

The event, The Humanitarian Law Project Decision: Problems for Peacebuilding, Aid, and Free Speech One Year Later, focused on the overbroad application of the “material support” of terrorism laws that create restrictions on humanitarian aid delivery, First Amendment rights and criminalizes peacebuilding efforts aimed at turning terrorist groups away from violence. 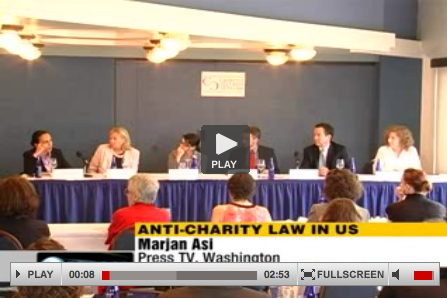 At the event, Amb. Soderberg, President of The Connect U.S. Fund and former U.S. ambassador to the UN, released a letter from a bipartisan group of 18 organizations and 27 peacebuilding and foreign policy experts to Secretary of State Hillary Clinton asking her to use her exemption power to make conflict resolution and other peacebuilding activities legal. “There is a range of ways the U.S. government can respond…Without a correction, opportunities to end violence certainly will be lost. Multi-track diplomacy and peacebuilding do not pose a threat to our national security, in fact, they strengthen it,” Amb. Soderberg said.

Moderated by Naz Modirzadeh, the Associate Director of the Program on Humanitarian Policy and Conflict Research at Harvard University, the forum featured:

Nathan Stock, Assistant Director of the Conflict Resolution Program at the Carter Center, said: “The restrictions …constrain our ability to make effective foreign policy, especially in the Middle East. They make the job of our diplomats more difficult.”;

Joel R. Charny, Vice President of Humanitarian Policy and Practice at InterAction, said: “It is impossible to reconcile international humanitarian law with the Holder decision and with specific counter-terror measures like the Partner Vetting System.”; and

Emily Berman, Counsel for the Liberty & National Security Program at the Brennan Center for Justice, said: “There is a real risk that this decision will chill not just academic work and pure speech but political dissent within the United States.”

The entire event with all speakers and a Q & A session can be downloaded here.