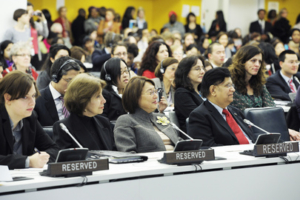 In 2019, gender inequality is still one of the world’s most pressing issues, including the emergence of protracted armed conflict. These can last up to decades at a time, so that we can no longer rely on the same old methods to end them and establish lasting peace. In particular, that means including more women in the peacebuilding process so as to properly address the concerns of the entire society.

Women and girls are arguably most hard-hit by armed conflict and its consequences:  sexual violence and exploitation increase (including human trafficking and child marriage), and access to education and sexual and reproductive health resources decrease. For indigenous women, women with disabilities, women in the LGBT+ community, women in ethnic and religious minorities, and other marginalized communities, these dangers are exacerbated. For these reasons, women and girls see conflict in a unique way that makes their experience incredibly valuable to the peacemaking and peacebuilding process.

However, these experiences are consistently undervalued and downplayed in traditional military and peacebuilding settings, which inevitably sideline women who are willing and able to engage in the peacebuilding process. According to the Council on Foreign Relations, women have been 2 percent of mediators, 5 percent of witnesses and signatories, and 8 percent of negotiators in all major peace processes from 1990-2019. Only two women have ever served as chief negotiators and only one woman “has ever signed a final peace accord as chief negotiator.”

This conclusion comes despite the CFR’s findings that “the participation of civil society groups, including women’s organizations, make a peace agreement 64% less likely to fail” and that “when women participate in peace processes, the resulting agreement is 35% more likely to last at least 15 years.”

It is an egregious error to routinely exclude women from the peacebuilding process. Doing so undermines the gender-based and -specific concerns that women have, making their concerns less likely to be addressed in the final agreement. For example, in the ongoing negotiations between the United States and the Taliban pertaining to the future of Afghanistan, women have not been included at all, despite the well-founded fears of their rights being stripped away. NPR reports “women have emphasized the need for education, justice, economic opportunity and representation on Afghanistan’s negotiating team.”

Saferworld recently interviewed Halima Godane, founder of the Somali Women Solidarity Organisation, and Saw Lin Chel, Saferworld’s program manager in Myanmar, about “how peacebuilding organisations can involve women more meaningfully in their work.” The entire interview is fascinating, but the following quote is of particular interest:

“Women experience all the problems related to conflict, so they need to be involved in all aspects of conflict prevention and peacebuilding. Women are disproportionately affected by conflict when compared to men: they raise children who cannot go to schools, they can be raped or killed, or the father or husband might be absent because he is off fighting, for example. Because of this, it is crucial to include women in conflict prevention. However, they face many barriers to meaningful participation, most of which are linked to their obligations as women.”

Luckily, women and their allies have been developing solutions for this exclusion problem for years now. For example, GAPS network just released the Beyond Consultations tool, which “is designed to support actors to move towards more meaningful engagement with women in fragile and conflict-afflicted states” (it can be downloaded here).

Another useful tool is #think10: developed by the National Democratic Institute, this tool assists safety planning and assessment for women in politics and gives them recommendations for all types of scenarios. These tools are just two of many other sources of information are readily available for peacebuilding organizations and involved states—all they have to do is look.

We know from decades of research that the way a country treats its women and girls is often indicative of how it treats marginalized peoples and is a signal about a country’s attitude towards civil society as a whole. However, if women are not represented—by women—in peace processes, how can we hope that their concerns will be addressed and rectified?

If the United States and other peacemaking parties want thorough, long-lasting peace in places like Afghanistan, they must include women and women’s organizations and ensure that their concerns are addressed both in the short- and long-term. Remaining steeped in exclusive peace processes limits the benefits and effectiveness of peace processes, especially for those most at risk of violence and oppression.