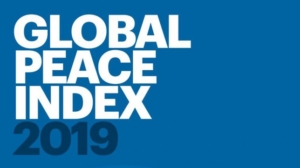 I had the good fortune of attending the release of the Global Peace Index 2019 (GPI) at the Center for Strategic and International Studies on June 20. The GPI is an annual report authored by the Institute for Economics & Peace; this year it’s a staggering 103 pages of data quantifying  everything from a comprehensive ranking of the world’s most and least peaceful countries to the greatest threats to peace in different regions to how climate change will impact the rates of violence across the globe to a new section on positive peace. It’s an incredible report, but it’s also deeply alarming, and not just because the United States is now ranked as the world’s 128th most peaceful country, after Bangladesh, Honduras and Brazil.

This sense of alarm was only heightened as I listened to one of the panel members, Shannon N. Green of Center for Civilians in Conflict, who spoke about the relationship between positive peace and civil society. In particular, she highlighted the importance of government-civil society partnerships, saying, “no government can solve all of these challenges” in reference to creating the institutions needed to build positive peace. She also stressed that, “When civil society comes under attack, positive peace suffers.” This is especially important to remember in light of the Holder v. Humanitarian Law Project Supreme Court decision, made nine years ago this month.

The Holder v. Humanitarian Law Project decision, in which the “Supreme Court upheld a federal statute that bans support to designated terrorist organizations, even when that support involves using international law to resolve disputes through nonviolent means” (Charity & Security Network), was a massive blow to the peacebuilding sector and significantly contributed to the shrinkage of civic space globally. It constrained peacebuilding by American groups  because they are unable to support peace processes that involve listed foreign terrorist organizations  without risking prosecution under the notoriously vague material support prohibition.. This particular decision made it impossible for the Humanitarian Law Project to “provide human rights and conflict resolution training to the Kurdistan Workers Party (PKK) and the Liberation Tigers of Tamil Eelam (LTTE), both designated foreign terrorist organizations by the U.S.” (Charity & Security Network), which assuredly had negative impacts for all those affected by the violence created by the PKK and LTTE’s conflicts.

Although the GPI only mentions civil society twice, its conclusions—that authoritarianism is rising, that the world “remains considerably less peaceful now than a decade ago,” that positive peace is “a strong leading indicator of future peacefulness”—highlight the importance of civil society and how crucial it is for governments and civil society allies to take preventive steps against its erosion.

Read the abstract of the GPI here.