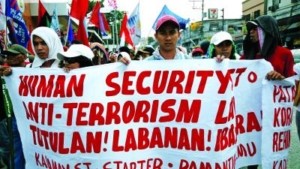 “The world has witnessed an alarming rise in restrictions placed on civil society actors to curtail their space and operations, impeding upon the realization of their rights to the freedom of expression, association, and peaceful assembly – frequently in the name of countering terrorism and protecting national security, among other drivers,” according to a March 2018 report from the Center for Strategic and International Studies, Counterterrorism Measures and Civil Society: Changing the Will, Finding the Way. ( Read more)

The report is a compilation of five case studies on closing civic space in Australia, Bahrain, Burkina Faso, Hungary and India, with conclusions and recommendations from CSIS staff. According to the report’s introduction, the International Center for Not-for-Profit Law has recorded the adoption of 64 restrictive laws on civil society from 2015 to 2016 alone, hindering the ability of civil society actors to “fulfill their vital role of protecting rights and providing services for citizens, and holding governments accountable.” The tools used by governments to constrain civic space include legal constraints, arbitrary detention of activists, and verbal discrediting or public vilification through media campaigns or online trolling from non-state actors.

The drivers of this trend include the recognition of civil society’s strength, and the lack of U.S. and Western leadership allowing the rise of populism, the report explains. Counterterrorism is often used as the reason for restrictions. Because of the lack of an agreed-upon definition of terrorism, states adopt counterterrorism legislation from “different starting points,” the report notes. Governments often conflate terrorist threats with broader issues of national security, enacting laws that are out of sync with international human rights principles. As the scope of counterterrorism legislation has evolved, the report notes, “it has been normalized and sometimes absorbed into national law, creating a worrying vagueness between exceptional emergency security measures for countering terrorism and ordinary criminal and civil processes.”

The report also examines the threat to civil society from attempts to stem the flow of illicit funds to terrorist organizations. The Financial Action Task Force’s (FATF) notion that all nonprofit organizations were at high risk to terrorist financing “has done incalculable damage to civil society,” the report explains. It adds, “In addition to giving governments an excuse to crack down on peaceful, legitimate organizations that are a thorn in their side, many countries have directly or indirectly used FATF compliance as a justification to pass restrictive laws in the name of countering terrorism.”

The five case studies in the report were compiled through in-country interviews and desk research. They characterize each country’s legislative and operational environment for civil society, national security threats, and counterterrorism approach.